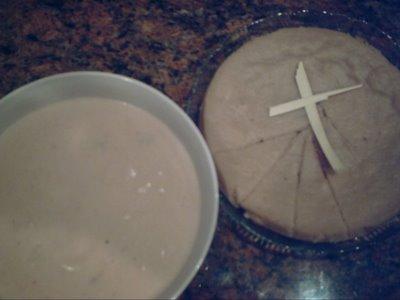 Christians in Kerala have seen traditions becoming extinct over the years, be it Holy Week, Christmas, Weddings, Funerals or other ceremonies. But there are some traditions which are observed with out any change. The Pesaha celebrations observed by Saint Thomas Christians is one among them.

One recognizes intimate and deep rooted influences of Judaism on Christian ethos in general. Resurrection, the climax of Christian event and the basis of Christian faith has particular importance among Eastern Christians.

This article focus on the Palm Sunday, Pesaha, Good Friday and Easter celebrations amongst the Nasranis.

Oshana Njayarazhcha, which is Palm Sunday in Malayalam is also called as Kuruthola Perunnal. A ceremonial procession around the church, with people holding the palm leaves and singing hosanna forms the highlight of the day.

On Karikkuripperunnal, which is Ash Wednesday in Malayalam, the blessed palm fronds received during the previous year are burnt in the families of Catholic Christians and members of the family mark their foreheads with the ash.

There was a tradition of burning the Kuruthola of previous year during Christmas night outside the Church and was in practice till the beginning of this century among both the Catholics and Jacobites.2

Jacobite / Orthodox continues this practice. Recently this Chaldean practice can be seen re introduced among certain Catholic Churches in Kerala.

Passover commemorates the Exodus and freedom of the Israelites from ancient Egypt. As described in the Book of Exodus, Passover marks the “birth” of the Jewish nation, as the Jews’ ancestors were freed from being slaves of Pharaoh.

On Maundy Thursday night, the Saint Thomas Christians, observe Pesaha. The breaking of bread, a bread that is broken amidst family members on Maundy Thursday in memory of the breaking of bread by Jesus Christ 2,000 years ago .In memory of this Paschal event, the Saint Thomas Christians have the unleavened bread called Pesaha-Appam along with Pesaha Pal or Passover coconut milk.

Pesaha (Maundy Thursday) is observed under the leadership of head of family. After the evening prayer, biblical passage about last supper is read while the Pesaha Appam is broken. Head of the family breaks the Pesaha Appam in to thirteen pieces. Thirteen pieces symbolizes Jesus Christ and the twelve Apostles. With prayers, he gives it to the woman of the house after soaking it in the Pesha Pal. It is then distributed amongst the family members according to their age (eldest to the youngest).

Apart from the celebrations at home, there is a special church service with Holy Communion at Pesaha ( Maundy Thursday)

The Current practice is to observe Pesaha once in every year. This is a living tradition among the families of various Saint Thomas Christians namely Syro Malabar, Jacobite, Orthodox, Mar Thoma, Syro Malankara and Chaldean reflecting a common tradition.

Till the beginning of this century this observance was three times an year.3 There is a tradition that Pesha is not celebrated in an year when some one of immediate family dies.

In olden days, there was also a tradition of sprinkling the coconut milk used to make Pesha pal in the front doors of the house.4.

Pesaha Appam is also known as Indri Appam and Kalathappam in some parts of Kerala.

Some say the name, Indri Appam got originated from INRI ( Mathew, 27,37) but others say that’s speculative and chances are limited.

In Southern Kerala, Pesaha Appam is baked with steam similar to Vattayappam and known common as Pesaha Appam or Indri Appam.

Good Friday is observed as a day of prayers, penance and fasting to commemorate the crucifixion of Jesus Christ on Calvary Hills nearly 2,000 years ago. Good Friday is of great significance and presently church service starts at 9 a.m. and continues until about 3 p.m., when it is believed that Christ was crucified.

Many of the present practices in Good Friday are result of influence from missionaries. In most churches, the Good Friday highlight is the `Nagarikanickal’ ritual, where the crucifix is carried through the streets/ church premises in a procession.

Amongst the Catholics, the `Way-of-the-Cross’, the 14 stations on Christ’s Journey to Mount Calvary from Pilate’s palace, is re-enacted with the worshippers moving to each station singing hymns as the story, which leads to the betrayal, arrest, trial and crucifixion of Christ, was narrated by the priest.

The most solemn moment is the drinking of ‘choruka’. This ritual of drinking choruka (a decoction made of bitter gourd juice and vinegar) and gruel (kanji) on Good Friday continues to be observed without change. This is given to every person who arrives to attend the Good Friday service and symbolises the event which took place when soldiers mocked Jesus by giving Vinegar while on the cross. Soon after this, the Good Friday service comes to a close in the churches here. Later on, mainly in Jacobite/ Orthodox Churches people line up to eat the gruel (kanji) made out of rice, pulses and mango pickle.

Till the beginning of twentieth century most of the Churches among Saint Thomas Christians remained closed on Saturday following the Good Friday. This practice was changed under the missionary influence

Amongest Jacobites/ Orthodox Qurbana is held on Saturday and dearly departed are remembered and prayed for.

For all Saint Thomas Christians, the Easter day begins with a visit to a church as early as 2 a.m. Sunday morning, while in some churches the Easter mass began along with the sunrise. The most important meal on an Easter day is a heavy breakfast comprising of appam, made out of rice powder, mutton or chicken stew, steamed bananas, eggs and cakes.

Easter week is very important with special church services on Palm Sunday and also every evening including Good Friday. Christians in Kerala celebrate Easter after observing a 50-day lent. The Saint Thomas Christians were very particular in observing lent. This is something which has been specially noted by almost all the missionaries who came to Kerala.

“ that they ( Saint Thomas Christians) left Crangannore on account of the many molestations of some also religious ( Portuguese missionaries), who did not understand anything at all that was not of the Latin Rite, and declared everything else at once as heresy and superstition, forcing them to eat fish and drink wine in Lent ( fasting days before Easter) against their Rite, though this fasting is more in conformity with the holy canons and the fasting of the orginal church.”6

Those who do so eat only vegetarian meals and refrain from consuming alcoholic beverages.

Easter falls between March 22nd and April 25th on the first Sunday after the first full moon following the vernal equinox (the time in spring when the day and night are of equal length – March 21st). The liturgical year revolves around the crucified and risen Christ. Easter is the hinge on which the whole church year swings.The fixing of date for Easter was discussed on Syond at Nicca in 325 AD. The decision taken was to celebrate Easter on Sunday that follows the full moon after the 21st of March. [ See below Post –568 from Joseph George. Many thanks to Joseph George for the corrections.]

Author can be reached on admin at nasrani dot net

‘The Syrian Christians of Kerala, Demographic and Socio-Economic Transition In The Twentieth Century’ by K. C. Zachariah