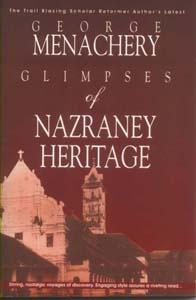 Notes about the Author

This is a book on essays on Nazraney culture and heritage. Many of the Menachery’s articles which are quite very famous are part of this book. This well written essays covers the 2000 years old history, tradition and heritage makes an excellent reading. It is highly relevant in today’s nuclear family set up of Syrian Christians where many kids are not fortunate to learn about the tradition from Grand parents.

Extract from the essay – Christianity Older than Hinduism in Kerala

Even much before the nineteen-seventies historians were fully convinced that Vedic Hinduism and the Brahmins must have arrived in Kerala only much later than the first centuries B.C./ A.D. The extensive studies made by Dr. M. G.S. Narayanan, the then head of the department of history at the University of Calicut, and at present the chairman of the Indian Council of Historical Research (ICHR) together with Dr. Veluthat Kesavan, now in the department of history, Mangalore University, shed much light on the beginnings of the Brahmin community in Kerala. Here it is important to note what Dr. Narayanan says concerning the new trends in Kerala Historical studies, Historical research had a delayed start in Kerala in the absence of History Departments in the University until the sixties of the last century. This gave the opportunity for interest groups to popularize their pet ideas and pass them on as authentic history. They had come to associate these myths with their own status and privileges.

Once the community leaders and political leaders published their theories about ancient history, their followers developed a frame of mind that resisted interpretations based on evidence. With the establishment of History Departments in the Universities it was possible for the present writer and his colleagues to build upon the foundations laid by Professor Elamkulam, sometimes extending and modifying the conclusions, sometimes demolishing and re-building too. This introduction becomes necessary because it is often found even today that the discussion of problems in ancient history are cluttered and obstructed or vitiated by earlier legendary notions which have been thrown out and exposed long ago with the availability of contemporary evidence.

To understand the origin and spread of Brahmins or Namboodiris in Kerala let us go through the words of Dr. Kesavan Veluthat in some detail:The Brahmans of Kerala are known as Nambudiris. Historical evidences as well as their own traditions suggest that they came from North India and settled down in Kerala, migrating along the West Coast. It is clear that they constitute links in a long chain of migration along the West Coast of India, carrying with them the tradition that Parasurama created their land and donated it to them. In fact, one sees this tradition all along the West Coast from Sourashtra on; and the Brahmanical tradition in the Canarese and Malabar Coasts is nearly identical to one another. According to that tradition, Parasurama created the land between Gokarna and Kanyakumari and settled Brahmans there in sixty-four gramas or villages. As a result, the Brahmans of Kerala share several common features with the Brahmans of the Canarese coast; this also distinguishes them from their counterparts in the rest of South India. In a historical inquiry, this is extremely important. What is necessary is not to look for the place of their origin or the identity and date of Parasurama but to ascertain the social function of such a tradition and examine the extent of linkages between the two regions and their cultures. It is stated that thirty-two out of the sixty-four gramas are in the Tulu speaking region and the remaining thirty-two in the Malayalam speaking region in Kerala. Recent historical research has identified these settlements on either side of the border.

Many of the earliest existing documents in Kerala history deal with the Christians or Mar Thoma Nazranies of Kerala often called the Syrian Christians. The half a dozen Pahlavi crosses are one set of such records. The kinayi Thoman copper plates, the Thazhekkad Rock inscription, the Tharisappalli copper plates, are another set of records. All these belong, certainly, to the first millennium C.E.

The oldest places in Kerala are connected with the encient christian community of kerala. Palayoor, Parur,and Kodungalloor are instances of this. It may be remembered that these three places, which occupy a place of pry in the St.Thomas Apostolic stroy are all on the oldest and bigest geoliliogical plate underground, so that generally these places were never affected by earthquekes.

By the reverse projection of Keralas population we may arrive at a figure like 300,000 for the population of Kerala in the Ist century.If the stories of convertion of people by St.Thomas has anycredibility the majority of people in Kerala, mostly inhabitting the 7 places where the apostle worked, must have become Christians-and the types of political and social systems and institutions of the Sangham age were perhaps very much influence by this huge and powerful Christian Community.

The large of Ist century BC/AC Roman Gold coins of Agustus, Tiberius and Nero discovered from the Palayoor and Parur belts indicate the close contact these areas had with conuntries and cultures on the western side of the Arabian Sea.

They are recods from practically every century, every civilisation, every church, and in every language, not only about Kerala and her products but also about the begainings and developments of christianity in Kerala and India.All that can be done here is to give a short list of these writings:

Just two more paragrphs: One about the status and social possition of the christians in the early centuries. Only hundred and fifty years back when women in Kerala tried to cover the upper part of their body there was a huge commotion which resulted in the Channar Lahala or the mutiny of the Channar caste. But then 1500 years back christians in Kerala were wearing silk gowns, silk turbans, gold ornaments above their head and on their body. Even today the gold business in Kerala is mostly in the hands of Nazranies: Alappatt, Palathingal, Josco, Thottan, Alukkas..etc.The 72 privileges enjoyed by christians even before the different copper plate grants reassured their right to continue to enjoy those privileges indicate that the christians were the predominant and ruling community of Kerala before the Brahmins gained dominance towards the end of the first millennium. The marriage customs of the christians described here yesterday will throw considerable light on the royal privileges and aristocratic status of the christian community in Kerala during the past well-nigh 1900 years.

Opinions about Glimpses of Nazraney Heritage

On the occasion of the book release T. N. Jayachandran, former Addl.Chief Secretary, Government of Kerala, and Vice-Chancellor of the Calicut University popped out this million dollar question. Why are the Kerala Christians of today reluctant to use the time honored term ‘Nazraney’ although it is a most poetic, simple and sweet expression.

Book can be ordered through the order form at IndianChristianity.com

Glimpse from History-Gondophares, Roman and Venetian gold coins in India