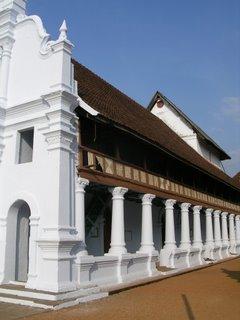 Beautiful Isn’t?
These are the historic twin churches at Ramapuram, one of the cradles of Christianity in Kerala, India. The smaller of these, in the name of St. Augustine, was built around 1450, and the other in 1864.

These monuments may be razed to the ground soon. What no invader, no government, no other community, have dared to try, is being done with abandon by the Church itself. Aisanet TV reported last evening that a referendum is being conducted among the parishioners of Ramapuram on Sunday, April 29, 2007 about demolishing these famous shrines. The Church officials have taken a strong stand in favor of the destruction. Therefore the outcome of the vote is a foregone conclusion. The priests do not seem to be worried whether such actions and procedures conform to the laws of the country.

The move to demolish the twin churches and build a ‘modern’ one in their place has been on for some time. The Hindu carried a report about this on February 18, 2005. The reason given for this proposal by the Vicar was that more space is required to accommodate the increased number of pilgrims!

Apparently he was not alert to the fact that the newer of the two churches was also built for the same reason, but people who were responsible then had ensured that the old one was preserved.

The vicar went on to give a piece of wisdom to the world: “God created the whole world for man. Archaeology is for the benefit of man and not vice-versa”. Shades of Benito Mussolini! Il Duce was reported to have said when his car knocked down and killed a boy, “What is the life of a child in the matters of state?”

The Syro-Malabar Church of Kerala, under which Ramapuram comes, is the second largest (after Roman /Latin) Rite in the Catholic Diaspora. It is headed by a Major Archbishop who is a Cardinal. Can the authorities of the Syro-Malabar wash off the responsibility for the demolition mania?

What about the Pope? In the recent Apostolic Exhortation, ‘Sacramentum Caritatis’, the Pontiff states,

“A solid knowledge of the history of sacred art can be advantageous for those responsible for commissioning artists and architects to create works of art for the liturgy. Consequently, it is essential that the education of Seminarians and priests include the study of art history, with special reference to sacred buildings…”

Let us join hands in this initiative and preserve our heritage.

Today we could point a symbol of our tradition only because our forefathers chose to allow the smaller church to remain there. If we take history, symbols of heritage are destroyed by attacking armies. Fortunately we have the Portuguese to blame for destroying our records and manuscripts.

We talk about the 2000-year-old heritage, but no church could boast of a history of a more few centuries. Barring the Malabar invasion of Tippu every other old churches were pulled down by Christians themselves in Kerala for constructing giant structures.

The Ramapuram twin church has a unique architectural style prevalent in the early colonial period with the Persian facade showing marked influence over the Portuguese style. The Roman columns and the veranda too are rare features of the churches of a bygone era.

The Department of Archaeology has urged the district Revenue authorities to take necessary steps to protect the centuries-old twin churches of Ramapuram, as the process of declaring them as protected monuments was nearing completion.

The Church authorities had proposed to demolish the twin churches built in 1450 and 1864 respectively, and erect a new church in its place. S. Hemachandran, director, Department of Archaeology, said the department had faxed a message to the RDO, Pala, stressing the need for conservation of the archaeologically important structures.

Meanwhile, it is learnt that the Church authorities decided to change the venue of prayers to a temporary structure, as the old church was “crumbling” and in a dilapidated condition. A final decision regarding the demolition would be taken only after the hearing on a submission made to the Government on the issue of the twin churches, sources close to the church authorities said. When contacted over telephone, Vicar of the Church Rev. Mathai Narivelil said there was no move to demolish the church immediately. “We will demolish it only with Government sanction,” he said.

The history of the churches also forms part of the history of Christendom in Kerala. The smaller of these Churches, built in 1450 in the name of Virgin Mary by the local people was later rededicated to St. Augustine by Portuguese Archbishop Alexis de Menesis. Its gold covered altar has intricate wood carvings. The original altar of the church, dedicated to Virgin Mary, is even today preserved and it has exquisite murals in the Kerala style.The bigger church was built in 1864 in memory of the first consecration.

The offerings in Ramapuram Twin church which is visited by thousands of pilgrims crosses more than a lakh in a week by any calculations. Its dishearten to know that the church authorities has not done anything so far to maintain or strengthen the structure. They are more interested to claim that the structure is weak and needs demolition.

The habit of destroying the heritage of the past must stop. Let us bear in mind that Kerala is regarded as the cradle of Christianity in India because of its rich tradition and evidences.

Let us also bear in mind that our heritage as detailed in our past, but also as is evident today, is so unique that it is hard to find its replication elsewhere in the world. Because of this, we have every reason to portray and showcase the pre-historic, historic and present heritage of our community in a way that no other can.

Unfortunately, over the years, we have watched records of the past destroyed, historical buildings pulled down to replace big concrete structures.

Please join us in protesting the move to demolish the twin structure at Ramapuram after the reported opposition of the Major Archbishop of the Syro Malabar Church, Cardinal Vithayathil.

The twin churches of Ramapuram are part of our heritage and part of the legacy we are entrusted with safeguarding for the future.

Guest Article by Abraham Tharakan with additional inputs. Originally published at Song of the waves blog Additional information from, The Hindu dated March 24th 2007 and Save Ramapuram Twin Churches

The Tiger and the Syrian Christians: Tipu Sultan’s ‘Padayottam’